The mechanical interaction between the nuclear fuel pellets and the cladding tubes (PCMI) is very important for safety studies as this phenomenon could lead to fuel failure and release of radioactivity. During a reactivity-initiated accident (RIA) considered in nuclear power plant safety analyses, the power increases suddenly due to a large reactivity increase in the reactor and the fuel pellet interacts with the cladding due to its sudden thermal expansion. Similarly, it is important to investigate the long-term behavior of irradiated claddings exposed to corrosion and hydrogen uptake in normal operation and in an interim dry storage facility.

Examination of the ductility of the fuel claddings as well as the cracking and fracture behavior is important both for normal operation and accident scenarios. Brittle claddings might fail in the elastic range whereas ductile material is expected to resist after significant plastic deformation induced by the sudden increase of mechanical stress. To model the mechanical interaction between the pellet and the cladding, tests are often performed using a multi-element segmented expanding mandrels to determine the ductility limit of the cladding tubes or rings.

To investigate the ductility of E110 Zr1%Nb cladding tubes used in WWER nuclear power plants, several segmented mandrel tests were performed in the Centre for Energy Research (EK) in Hungary. Feasibility analyses and three-dimensional finite element numerical model calculations were performed in order to prepare the experiments. A modified mandrel test setup was used to model the mechanical interaction between the rigid fuel pellet fragments and the cladding tubes. The mandrel ductility tests were conducted at room temperature and at 300 °C with inactive, as-received and pre-hydrogenated cladding ring samples. The results show a gradual decrease in ductility as the hydrogen content increases. Minimum ductility was reached above 1500 ppm hydrogen content. 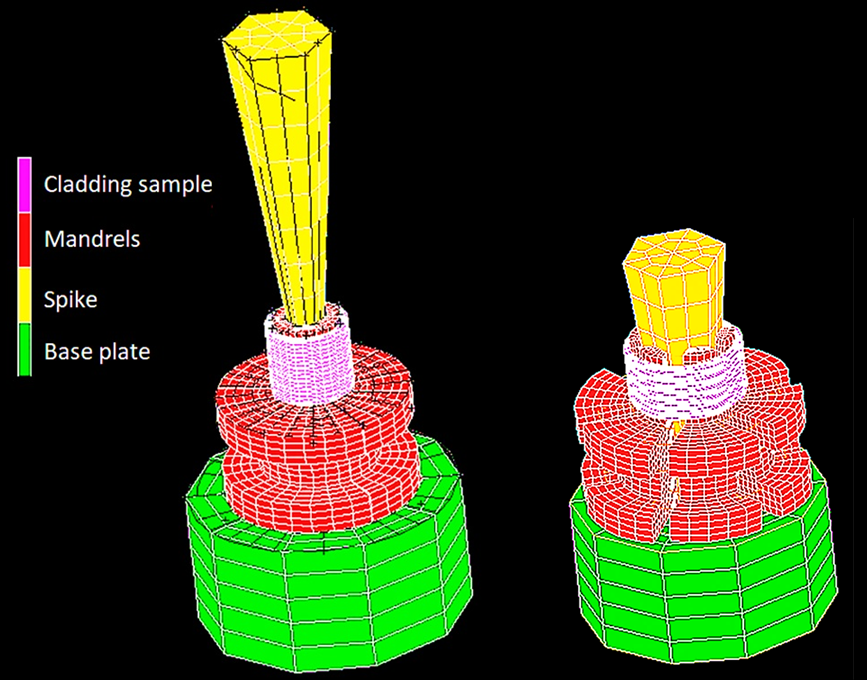 The finite element model of the finalized segmented tool during the test. (© EK-CER)
Contact